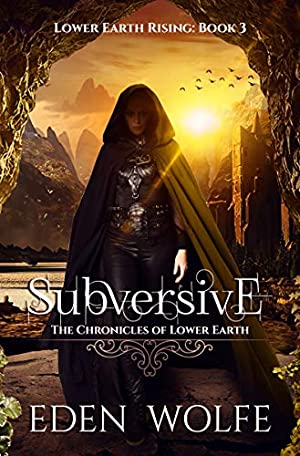 Eden Wolfe knocked it out of the park with this one!  Subversive is my favorite of the Lower Earth Rising Series so far.  I’ve been reading Christmas books during December, but I had to fit this in.  Queen Ariane, Gale, the Sisters, and a mysterious illness trickle  throughout the book. So intriguing!  Arin is introduced Read more

END_OF_DOCUMENT_TOKEN_TO_BE_REPLACED

The Gist Queen Ariane I received this book from the author in return for an honest review. The Culling is the second in the Lower Rising series by Eden Wolfe. The story continues with a new young queen ruling the roost.  Queen Ariane is young and genetically modified to be emotionless.  Culling people is a Read more

END_OF_DOCUMENT_TOKEN_TO_BE_REPLACED

Selfsame: Lower Earth Rising:  Book 1 is science fiction. The Earth has been reduced to areas called Lower Earth and Upper Earth due to the Final War.  Upper Earth is where the old men live.  Queen Maeva rules Lower Earth fighting to keep Upper Earth from invading and destroying.  Men are dying on Lower Earth.  Read more