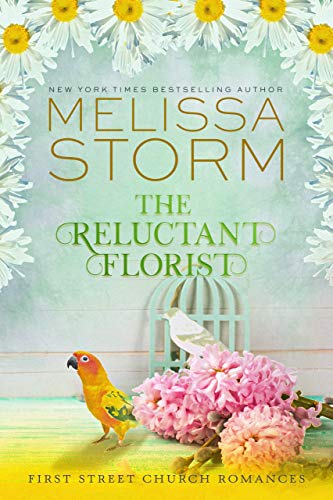 The Reluctant Florist is a mediocre romance novel. Although I wanted to like it, I was rather let down. In the past, I have been reluctant to write reviews for books I wasn’t impressed with, but I’ve decided that is part of the gig! I hate to hurt anyone’s feelings, so it is tough to write a negative review. But…..here goes.

First though are my good thoughts. It is a clean romance for those that don’t care to get down and dirty with their romance novels. There is a cute little bird in the story. The cute little design at the top of each chapter was simply adorable. I love little touches like that in books! I like that the story includes God. That is something missing in much of society today it seems.  Maybe I’m wrong. It wouldn’t be the first time. It is just nice when God is included.

The overall plot of The Reluctant Florist was not bad, but it didn’t have much meat to it. The characters weren’t as developed as I would have liked either. Ben was in his mid-twenties and was portrayed as a bit of a lackluster guy. His life stalled because of his brother’s suicide and his mother’s addiction & depression. That is understandable but it had been many years and he hadn’t moved on at all. Strange to say the least. I really don’t think Summer would have been drawn to him.

Summer came to Sweet Grove to run her aunt’s flower shop for a short time with no instruction from her aunt. How in the world does someone walk in off the street and run a flower shop, not to mention putting together bouquets? She finished college and doesn’t really know where her life is going next so this is a time filler for her. I didn’t find Summer to be a truly likable character. She told Ben she only wanted to be friends so she wouldn’t hurt him when she left, while at the same time befriending his mother. Then she whines about why their relationship hasn’t progressed. She seemed selfish to me.

Ben’s life was superb once Summer was in it. Everything turned around, including issues with his mother. If that was all it took, he could’ve done the same thing with his life without her instead of wasting so many years in limbo. This was especially odd to me because they only knew each other for a couple of months. I realize some romances are like that, but these two didn’t even know much about each other, and Summer is now Ben’s lifesaver.

I’ve got to admit romances aren’t really my thing, but I couldn’t get into this one. Maybe it will be different for you if you choose to give it a try. Each to their own, right?