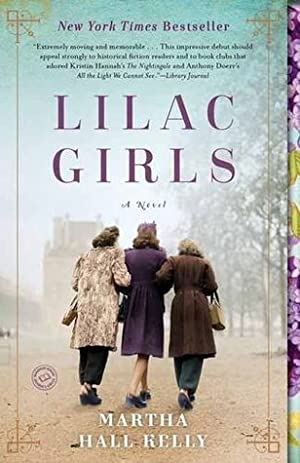 💜Lilac Girls tells about the dark days of WWll in Poland & France. It is the tale of three women, each living tremendously different lives.

💜Caroline is a single socialite who works tirelessly to help those in need. Herta Oberheuser is a young German doctor who accepts a government job at a woman’s Nazi concentration camp called Ravensbrück. Kasia is a young Polish woman who is sent to the concentration camp with her mother, sister, & friends. We learn of their lives & interactions with each other.

💜As with any WWII story, this is sad. I will never understand how so many were willing to hurt others in such horrific ways.

💜I have read quite a few books about this time period & hadn’t heard of the Polish rabbits. These women were not only put in a concentration camp, they were used as guinea pigs. Operations were performed on some, leaving them forever scarred. They were called rabbits partly because they hopped around due to injuries from their surgeries.

💜Martha Kelly did her research, using real people & information to tell this fictional story. If you are interested in this topic, this is a wonderfully scribed story.