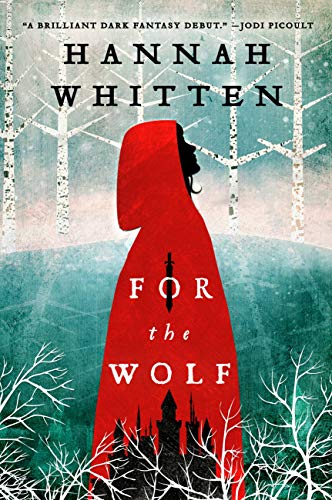 Quite the fantasy here! Red is the second born to the queen, meaning she would be given to the wolf of Wilderwood Forest to protect the people and hopefully bring back the five kings who are locked there. Neve, the firstborn daughter, will become queen one day. This is the way of Valleyda. Even though Neve and Red are twins, this is the way it has always been and there doesn’t seem to be any way to change it.

The craziest part is that Wilderwood is not just a forest.  It is alive, locking in the people who were there when it was cut off years ago. The forest has to be cared for to keep the shadows from making their way out, as they are dangerous. The wolf is in charge of keeping the shadows at bay, even though it takes a toll on him. Blood is shed in the process.

Red faces the day where she is given to the Wilderwood as her sister vows to get her out somehow. Red makes her way through the woods as it tears at her, until she comes to a rather odd home, rather a continuation of the forest itself. She finds the truth here. The wolf is a man, and she learns more about the facts of Wilderwood as she works to help the wolf contain the shadows with the help of the forest’s power. During all this, her sister is working with others to bring Red home, but many pay a price for that.

Holy Guacamole! Hannah Whitten has a mythical mind to write fantasy like this. There was so much going on throughout the entire book, that it was hard to keep up at times. A living forest, people with the power of the forest in them, moving trees, visible changes to people, characters with emotion, characters without emotion, and mystery galore are what you can expect in For the Wolf. And get this, it isn’t the end. There is a little taste of the next book at the end.

It was a bit of a slow start, but once I got into it, it sped up. There is some repetitiveness that stretches out the story as well. I tend to be irritated by the tongue-twisting amount of weird names, which I realize is common in fantasy writing. It just bothers me and makes it hard to keep track of what is going on at times. If you are a fantasy lover, this is a book for you. Detailed, imaginative reading is what For the Wolf is all about.