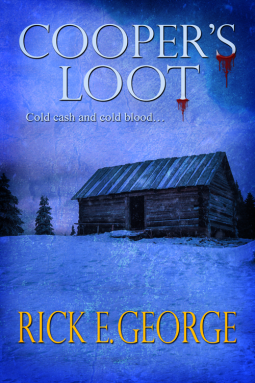 I received Cooper’s Lot free from the author through Voracious Readers.  This story centers around the main character, Bev Wikowski, a reporter for the Portland Morning Chronicle in 1972.  After doing an interview she is drawn into the Spar Pole Saloon looking for a quote to use in her article.  While there, she is drawn to a group gathered around a long haired bearded man who is spouting off a story.  He is looking for people to go on a treasure hunt with him and if they find the loot, they will split it up between them all.  Bev sees a story that could further her career, as being a woman reporter in the 70’s meant girlie stories.  She wanted more.  She decides to go on this adventure even though there is a chance of a severe storm.  She packs up her camping gear and heads to the meeting area.  The adventure ends up being more than she bargained for.

This book is a fictitious story about DB Cooper, the man who hijacked a Boeing 727, taking $200,000 with him as he parachuted from the plane between Portland and Seattle. The money and the man both disappeared.   I watched a program about this at one point and found it interesting, so I was excited to continue reading to see what kind of a spin on the story Rick George’s imagination would take.  There is a ragtag group of treasure hunters camping together, various unseen adventures, a humongous snow storm which came early, and the fight to survive.  Of course there are a couple of curve balls in there as well. This book was full of drama!  As in real life, not everyone in this little group got along with each other.  As each event happened, they began to get a bit paranoid.

Cooper’s Loot took me on a whirlwind adventure as the characters spent time together in a vicious snowstorm looking for the $200,000 with Andy’s direction.  Apparently he was in the service with DB Cooper himself who told him where to go to find the money.  The reasoning behind this being that the FBI wouldn’t care if a goofy group of people were searching for it.  I found it odd that Andy went to a bar looking for people to go with him.  Why wouldn’t he have gone on his own and kept the whole amount if he knew where it was? Would strangers be trustworthy to keep his secret and if they found the money, would he still divide it up among them, or did he have more devious thoughts?   Between the storm, the strange group, and an extra character thrown in, it didn’t go the way I thought it would.  I enjoyed reading a fictitious story about an event that really happened and that I had previous knowledge about.